New paintings have been loaded onto the website in anticipation of this exhibition. 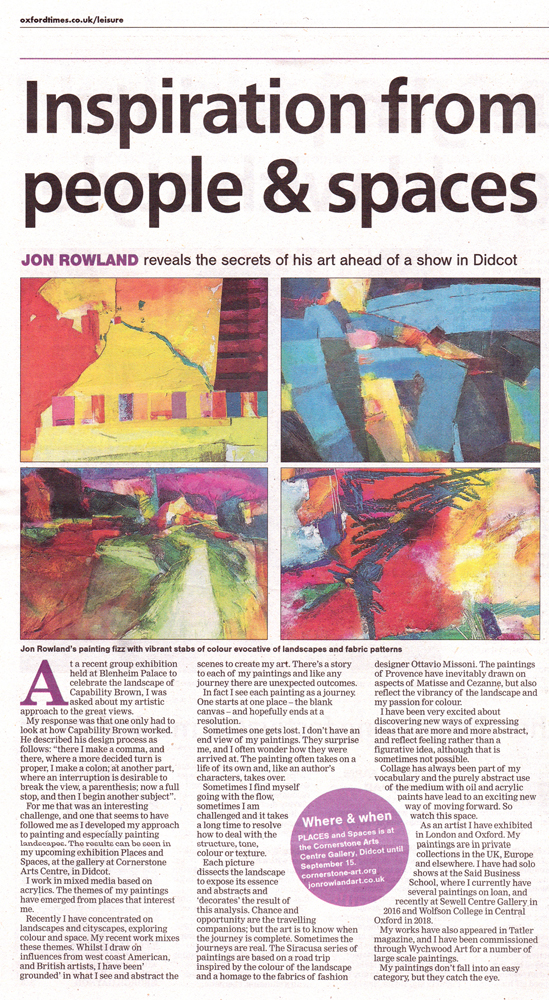 Review and interview with Jon at the time of his exhibitions at Art in St Giles , Oxford and at Cornerstones Art Centre Gallery, Didcot.

Reviews of Jon's exhibition at the Sewell Centre Art Gallery 2016 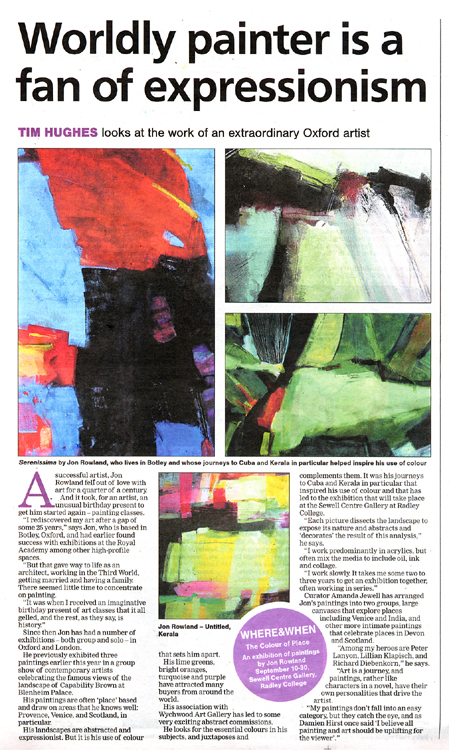 Jon is one of six contemporary artists who have been chosen to be part of an exhibition on Capability Brown at Blenheim Palace from February to May 2016.

The artists looked at the landscape of Capability Brown 300 years on from his original design, and captured similar viewpoints as other artists have done in the pas, showing their unique style response to the landscape. The exhibition concentrates on the artistic interpretation of the landscape from various key locations and the juxtaposition of these contemporary views with those of Turner, Piper and other famous artists. Three of Jon's paintings will be shown. 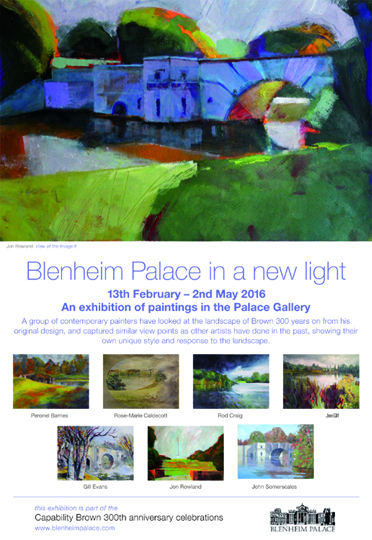 "Equally striking, though aesthetically juxtaposing are Jon Rowland's powerfully abstracted shapes that comprise his colourful, bold mixed-media and acrylic landscapes. That said, it is also the tension between 'contained environment' and the untamed countryside that fascinates this artist. Rowland's depictions of Blenheim are unexpected, arresting, and somehow unfathomably fitting." 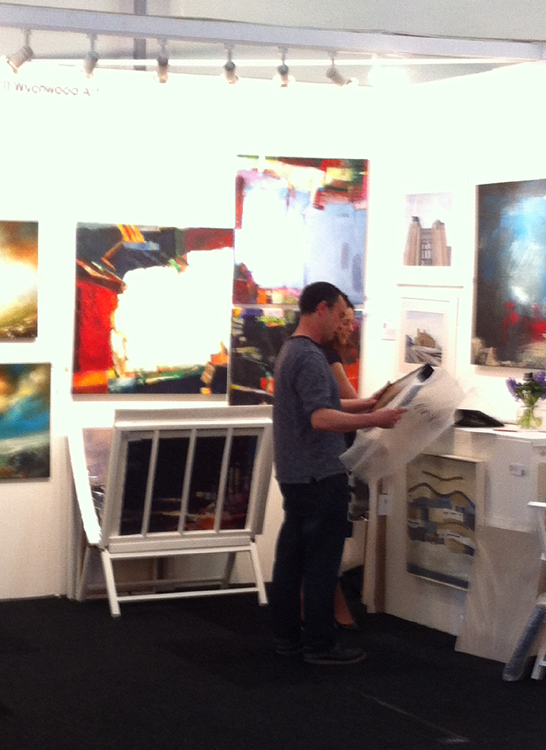 Jon was one of the artists shown by Wychwood Art at the 2015 Battersea Art Fair and at the Wychwood Art Gallery in Stow-on-the-Wold www.wychwoodart.com. This has been a very complementary relationship and has led to a major commission for and abstract painting (1.7m x 1.3m) on canvas in France. He also took part in Oxford Art Fair 2013 and 2014. 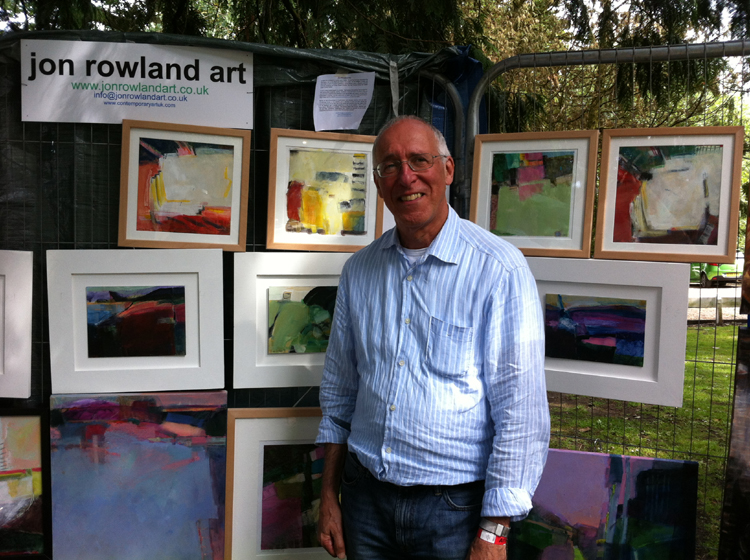 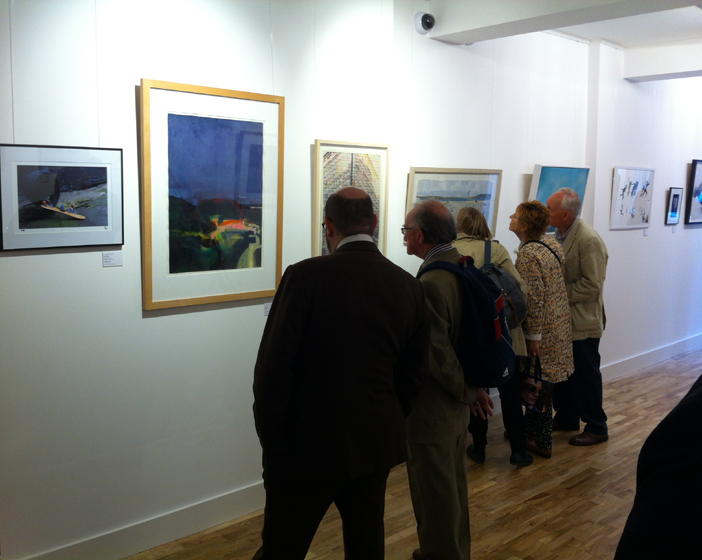 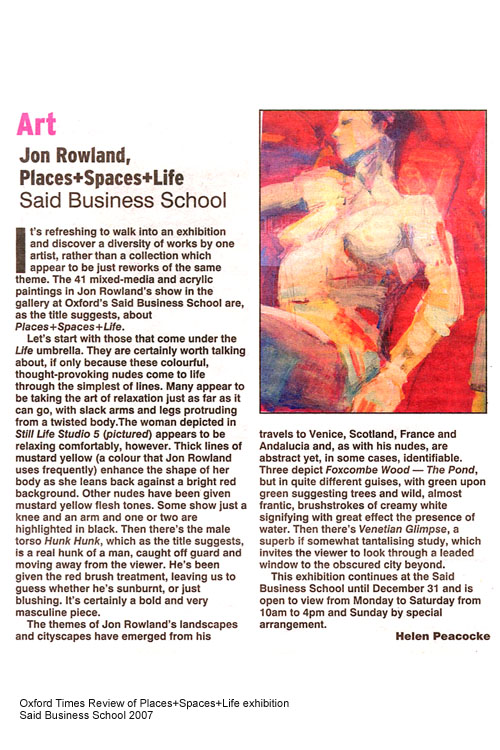 Having succesfully exhibited at Said Business School in 2007 (see review) and Wolfson College in Oxford in 2010, Jon held a very successful exhibition at Wolfson in November 2012, Nearly half the paintings were sold and people were very generous with their praise about the colour and vibrancy of the pictures. One buyer called it a 'dazzling show'.

Jon Rowland presented a gift to Jan Scriven of Wolfson College's Arts Committee to thank the College for it's support. 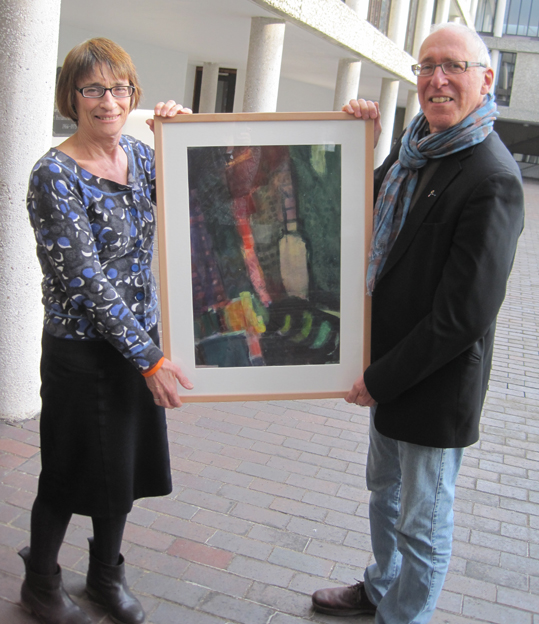